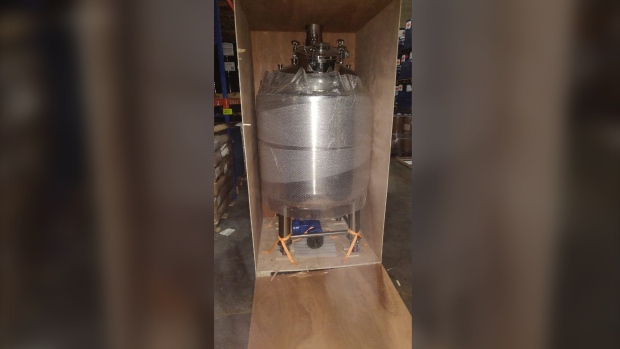 TORONTO — The Royal Canadian Mounted Police (RCMP) have charged the owner of a chemical company for allegedly supplying chemicals to illicit laboratories for fentanyl and methamphetamine production.

RCMP officers of the Toronto Serious and Organized Crime Unit based in Milton have been investigating Genaxx Pharma, Dufore Technologies and its owner Wister Wei Lap Lee for allegations of diverting chemical products and laboratory equipment to illicit laboratories to manufacture controlled substances, including fentanyl and methamphetamine.

On Saturday, the RCMP said it had laid charges in connection with the investigation.

Thirty-eight year old Wister Lee, of Markham, was arrested and has been charged with:

The RCMP has also charged twenty-nine year old Sean Curtis McDonald, of Toronto, with offering to transfer restricted firearms when not authorized.

“There is a marked disregard for the wellness of individuals in the profit driven crime of chemical product diversion,” Inspector Marwan Zogheib of the Toronto West RCMP Serious and Organized Crime Unit said. “The illegal firearms acquisition by criminals is of particular concern and it increases the propensity for violence.”

Anyone with further information is asked to contact police or Crime Stoppers anonymously.

Oil declined the most in almost two weeks

March 8, 2021
Contact Center Intelligence Market Growth, Overview with Detailed Analy…[More]
September 7, 2020
Take a look at some of the Most Effective Polyester Face Masks

December 1, 2020
Procurement as-a-Service Market Global Trends with Industry Growth to 2…[More]
September 15, 2020
Environmentalists have pinned their hopes on the nation’s most po…[More]